After an exciting and rewarding 53 years at the trial bar, Rutledge retired from the active practice of law. While practicing with Duffy & Young, he focused his practice on complex business issues and serious issues affecting individuals and their families. He tried over 200 cases to jury verdict was involved in over 50 appeals. At the end of 2021, Rutledge became of counsel to the firm.

Rutledge graduated from The University of Virginia with distinction in 1965 and The University of Virginia Law School in 1968. Before actively practicing law, Rutledge served in the U.S. Army and was awarded a bronze star for meritorious service in ground operations against hostile forces as Captain of MACV Advisory Team No.7 from 1969 to 1970 in Long Khanh Province, Republic of Vietnam.

Rutledge joined Young Clement Rivers, LLP in 1970 where he practiced with his father and ultimately became managing partner of a 50 lawyer firm. At the beginning of 2011, Rutledge joined his son at Duffy & Young to continue his active and successful career of representing clients in the Courts of South Carolina.

Rutledge holds the highest professional AV Preeminent rating in the Martindale-Hubbell Law Directory, has been listed for more than 30 years in the Best Lawyers in America, and for more than 12 in years in Chambers USA America's Leading Business Lawyers. He is a South Carolina SuperLawyer and has been selected as a Best Lawyer in America for Bet-the-Company Litigation every year since 1999.

In addition to his work as a lawyer, Rutledge has served on Charleston’s City Council and the Board of Directors of BB&T, Charleston Day School, the Preservation Society of Charleston, Woodberry Forest School, Historic Charleston Foundation, South Carolina Coastal Conservation League, the Middleton Place Foundation, the Lowcountry Land Trust, the Rivers Foundation, the Charleston Library Society and Theodora Park Foundation. He also was President of a railroad, and Co-Director of Business Development for American Windsurfer Magazine. Rutledge currently serves on the Board of and Brick House Plantation.

In his retirement, Rutledge looks forward to being with family and friends, fishing, sailing, travelling, and reading. 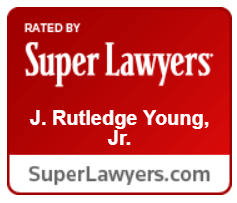